FOR RELEASE JUNE 25th 2018
For more information, contact rob at robbyduguay dot com, or use the contact form.

About:
Original Soundtrack from Reptoid Games‘ Fossil Hunters, an action-adventure game about digging for fossils and building your own dinosaurs. The score features a 60-piece orchestra (Budapest Scoring Symphonic Orchestra), live percussion (Doug Perry), solo piano versions (Trevor Alan Gomes) of the themes, and a few surprises along the way.
Composed and produced by Robby Duguay.

Album Credits:
Each track was composed and produced by Robby Duguay, and arranged/orchestrated by Trevor Alan Gomes. All sequencing was done by Robby Duguay, except track 1 which features additional orchestral percussion sequencing by Mason Lieberman. Tracks 9-12 recorded by Caleb Parker. The album was mastered by Andy Magoffin at House of Miracles. Performers as listed.

Track Descriptions:
01. Fossil Hunters Main Theme (01:43) (VIDEO HERE)
Featuring Doug Perry (percussion), Trevor Alan Gomes (piano), and the Budapest Scoring Symphonic Orchestra.
This was the first theme written for the game, and went through the most changes throughout the course of its life. Inspired by themes like Monster Hunter and Indiana Jones, the main theme is declared by the horns, and then various themes from the music of the rest of the game is passed around throughout the orchestra, like the overture in a classic stage show.

02. The Lab (03:16)
Featuring Doug Perry (percussion) and Trevor Alan Gomes (flute).
When you first start the game, you enter The Lab, a home base where you take stock of the fossils you’ve assembled. In the game, various instruments join the ensemble, coming and going at random to form an ever-evolving instrumentation.
This piece trods along percussively, evoking a similar feeling to that of The Sims.

03. Digsite (03:06)
Featuring Doug Perry (percussion), and the Budapest Scoring Symphonic Orchestra.
Once the player uses the elevator for the first time, they are faced with the Digsite, a mine filled with dirt, rocks, ferns, and (thankfully) fossils to assemble.
The music marches away happily, digging its way through the mysteries as it goes.

04. Fungi (03:33)
Featuring Doug Perry (percussion), and the Budapest Scoring Symphonic Orchestra.
Continuing down the elevator, the player is faced with an area filled with moss and mushrooms. The music here is darker and more mysterious than before.
The ride cymbal in this track was a last minute addition, played by Robby Duguay with coffee stir sticks as mallets, to give as light of a performance as possible. This track highlights a custom pop bottle instrument, designed by Matthew Steven Miller.

05. Fire and Fauna (02:04)
Featuring Doug Perry (percussion).
This is the quintessential lava/fire level, accompanied by the quintessential lava/fire music. The welcoming sounds of the strings and woodwinds of the orchestra are now gone, but electric guitar and the swelling of the brass section establish the heat and danger of this area.
Robby plays electric guitar, flugelhorn, french horn, and euphonium on this track.

06. Regolith (03:02)
Featuring Doug Perry (Marimba), and the Budapest Scoring Symphonic Orchestra.
The final area that the player reaches in Fossil Hunters (spoilers) is a mysterious and majestic moon-like surface, with new kinds of fossils they’ve never seen before. The music in this area plays like the theme for a space adventure, not unlike the thoughtful fanfares of Star Trek or Apollo 13.
Robby plays french horn, trumpet, flugelhorn, and euphonium on this track.

07. Elevator (Intermission) (01:08)
This track started as a joke when the level select menu (an elevator) was implemented in the game. “Wouldn’t it be funny if the elevator had elevator music?!” – “Ok; this is happening.” The style of this track was inspired by John Swihart’s distinctive work on Napoleon Dynamite.

08. Fossil Hunters Main Theme (Piano) (02:02)
Featuring Trevor Alan Gomes (piano).
This was the last track to be recorded for the game, only days before its original release. It was recorded live on Trevor’s Twitch stream, on his own grand piano, and is played in the game during the credits. This is the only piece on the soundtrack that doesn’t line up with its alternate version (track 1).

09. Digsite (Piano) (03:04)
Featuring Trevor Alan Gomes (piano).
This theme plays when the game is paused in the digsite area. When the player pauses the game, the music seamlessly transitions to this version of the piece (the same is true for the rest of the tracks following this one on the album).

11. Fire and Fauna (Piano) (02:12)
Featuring Trevor Alan Gomes (piano).
This theme plays when the game is paused in the lava area. It starts out in a mysterious manner, slowly growing bigger, more aggressive, and “sassy” (Trevor’s word).

12. Regolith (Piano) (03:02)
Featuring Trevor Alan Gomes (piano).
This theme plays when the game is paused in the final area of the game. Bigger, more thoughtful, and certainly with more reverb, this piece swells and flows as the player examines their notebook in this part of the game.

The Story:
Robby met the technical director from Reptoid Games (Ryan Miller) at a Fan Expo event in 2012, where Ryan was exhibiting in artists’ alley. Since then, they’ve have had the pleasure of working together on a few projects at different studios, most recently Robby was brought in as the Audio Lead on Fossil Hunters, composing and producing the soundtrack. The development of Fossil Hunters was supported by the Ontario Media Development Corp, won the Ubisoft Indie Series, and ran a successful Kickstarter campaign in 2017 with 745 backers, prior to launching in 2018.

The team at Reptoid Games

An avid brass player, Robby knew that he needed to use a fanfare to establish a strong, adventurous main melody that would evoke memories of adventures like Monster Hunter, or those of Indiana Jones. This lead to early versions of the themes where he played all the brass parts himself. While recording and preparing these demos, he got into contact with Trevor Alan Gomes, whose Twitch streams he had started to follow. Being familiar with his previous work on the Chrono Trigger Piano Collections album, he knew Trevor was a talented pianist and orchestrator. Excited with the idea of making a Fossil Hunters Piano Collection, Trevor joined the team and began working on expanding the arrangements Robby had composed for the game.

Some of the instruments Robby recorded on

With the atmosphere of the game’s stages and the percussive nature of digging, having excellent percussion was absolutely necessary for the Fossil Hunters soundtrack. Thanks to Saint-Saëns, bones and fossils are often associated with tuned percussion instruments (Danse Macabre‘s xylophones simulate ratting bones, and there is even a similar “Fossils” movement in the Carnival of the Animals). With previous works like the Undertale Variations, and his performances on the Civilization 6 soundtrack, it was a natural fit to bring in percussionist Doug Perry, performing on the marimba, djembe, snare drum, and various other percussion instruments. 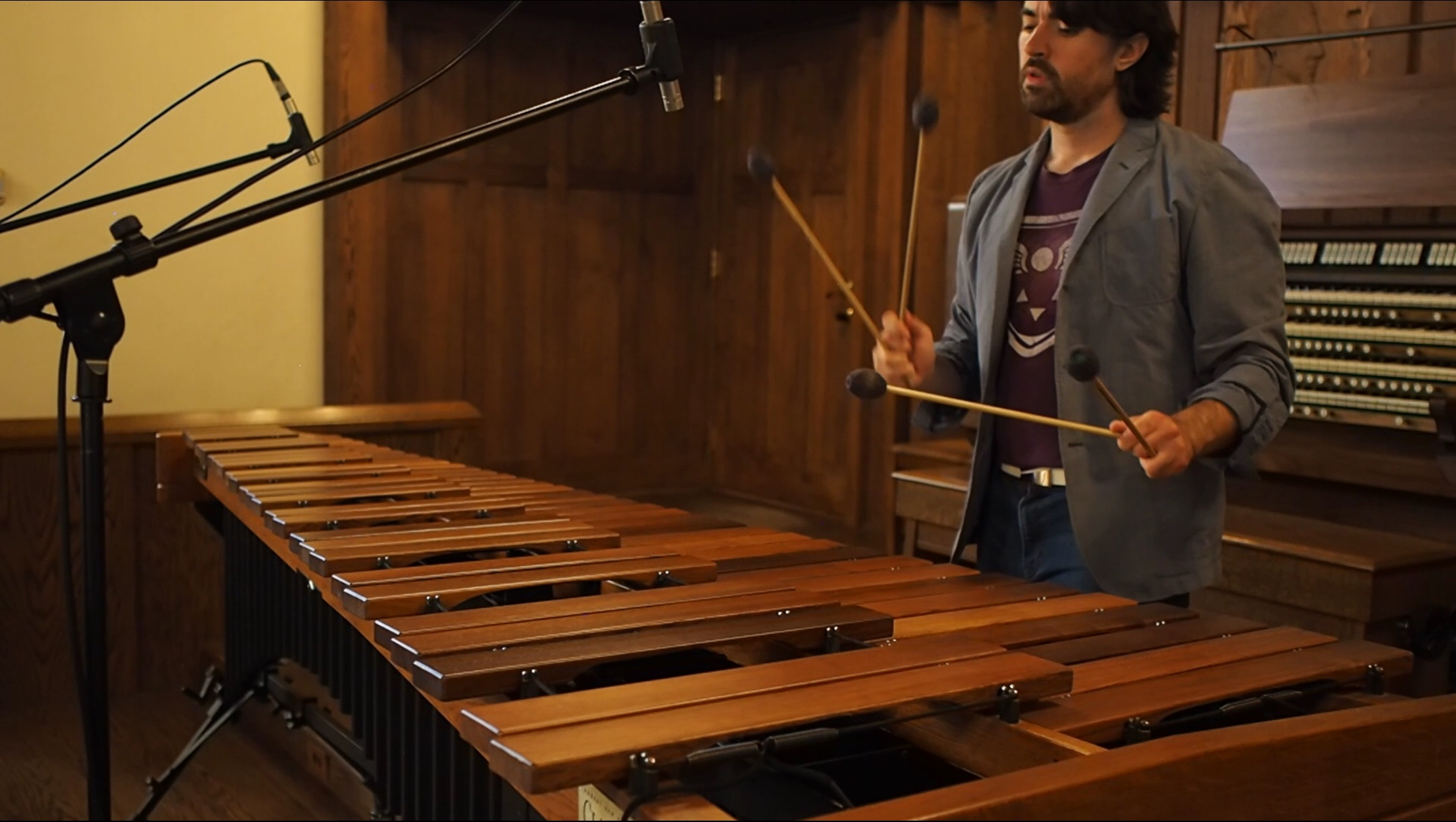 Doug Perry on the Marimba

As Robby and Trevor continued to polish the music, instead of preparing a Piano Collections album after the fact, they decided that piano music should be a part of the game itself. To reinforce the change between gameplay states, they implemented an adaptive music system that fades seamlessly between the “normal” version of the music in the game world, to a “piano” version of the music in the pause menu/notebook. The Piano Collection tracks were arranged and performed by Trevor Alan Gomes, and are included in the Original Soundtrack, as tracks 8-12.

Trevor Alan Gomes on the Piano

With the release date of the game approaching, it became clear that this score needed to be performed by a real orchestra. Trevor expanded the pieces once again, and on January 19th, 2018, the 60-piece Budapest Scoring Symphonic Orchestra brought the Fossil Hunters scores to life. 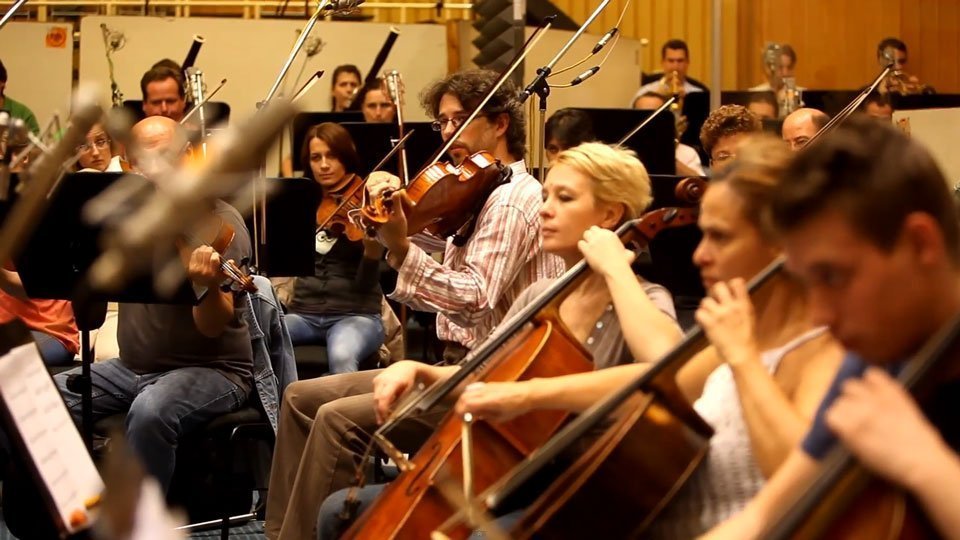 Fossil Hunters’ soundtrack is one of percussive and melodic intrigue. Robby Duguay has crafted a restrained and cavernous soundtrack that doesn’t need, or want, to scream in your face. This is all about the atmosphere of burrowing deep and this soundtrack has it in spades and with a piano collection to boot.

While some tracks present a grand orchestration within their composition, others are more simple and passive and allow the player to take charge without overwhelming them in the music. This adds layers of depth to the gameplay with Duguay’s choice of accompaniment to the overall aesthetic.